So we’ve all probably heard the latest change to the Google local packÂ listings be referred to as the ‘Pigeon Update’. Whether Google are officially calling it that or not, we’re going with it for this post.

After reading some interesting posts about big data changes and how tracked SERPÂ results have fluctuated, we thought we’d cross reference our big data set. Managing a 1000 SEO clients is tough and one way we stay on top of performance is tracking 27,000 keywords on a daily basis.

Along with this we have an internal algorithm which we use to deem whether a local client is performing of not, it gives us visibility of if and when rankings change for an individual client, certain vertical or across the board. We also track whether a client appears within a ‘local pack’ in the SERPs, meaning any reduction in impressions of packsÂ would be visible in our data.

So based on our internal algorithm, what changed for us and how did it look? 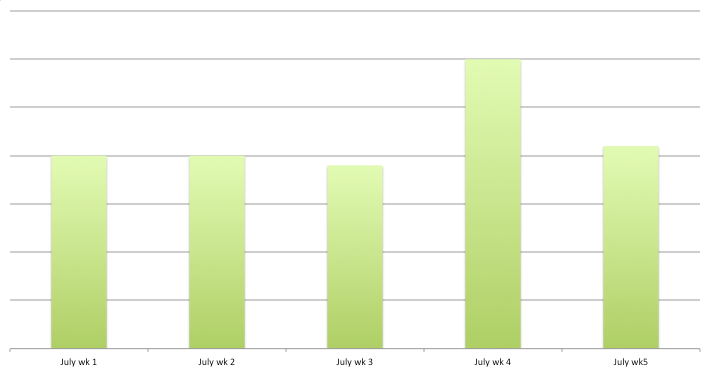 Looking at the graph above which tracks non-performing keywords you can clearly see a rise in non-performance at the beginning of last week. It then settled back again at the end of the week. Could this be Pigeon affecting our results?

Compare this to Moz’s data that Dr Pete discussedÂ http://moz.com/blog/the-month-google-shook-the-serpsÂ and you can see a clear correlation. When his percentage of pack impressions reduced, so did our amount of performing keywords.

The drop in impressions followed by an increase could be due to Google rolling back the severity of the update, howeverÂ Dr Pete suggested:

We now are convinced that this was a mistake (indicated by the “?” zone) â€“ essentially, Pigeon changed localization so much that it broke the method we were using.

Suggesting this was a SERP tracking method and not a roll out is interesting as we experienced the same results and pattern. Meaning it was a roll back from Google or we use the same SERP tracking provider as Moz?

Conclusion – How much were we affected?

In total then we saw a drop in performance of around 1%, not too much to worry about as we see a similar percentage flux month on month anyway. So if we think we have been relatively unaffected, why? And what can web-masters do to rectify any loss of impressions?

After some internal discussion and Google suggesting that they are applying a more traditional approach to the listings we have come up with some simple suggestions to rank better.

Google has released a new algorithm to provide a more useful, relevant and accurate local search results that are tied more closely to traditional web search ranking signals. The changes will be visible within the Google Maps search results and Google Web search results.

We have a lot of focus on local rankings and believe we have a great understanding of what works and what doesn’t. Below are some simple guidelines: