A few days have passed since the first MageTitans event was held in Manchester, and now that dust has settled and my hangover has respectfully subsided I’m going to reflect on what was a superb occasion for all involved.

Attending from the Creare offices along with myself was author of two Magento books and my CreareSEO partner in crime, Rob Kent. We made the 120 mile trip from Rugby to Manchester on Saturday morning just in time for the 9:30am start.

I have attended all Magento Live UK events and although I enjoy each event for what they are, they have become a little stale for me in recent years. This is not Magento’s fault as Magento Live is clearly a merchant-targeted conference with a very deliberate commercial subtext. I’m under no illusions about what to expect, but we go anyway to keep up with what’s going on in the Magento universe.

I think I speak for all Magento developers across the UK when I say that we have been crying out for an event like this for years. An event by developers for developers – and no mention of someone trying to sell me their ‘fabulous new email marketing suite’.

This principle teaches us to write our class methods in such a way that makes them open for extension, but closed for modification. It makes much more sense when you see examples, so you can see the slides from the talk just below.

Vinai seemed almost like he was in teaching mode as he breezed through the slides, his explanations of complex ideas delivered in a way that makes them understandable to anyone watching. I have it on good authority that the Magento development fundamentals class with Vinai is well worth attending for new Magento developers.

Vinai kept referring to this book as a great introduction to object-oriented design patterns.

11:00am, Scalable and Highly Available Data in Magento – Alistair Stead

Session Digital’s Alistair Stead also gave a very in-depth talk about how to maximise the performance of your Magento store by making your databases scalable and your queries more efficient. Alistair gave us 8 of the many steps to performance enhancement:

Scalability applies to absolutely everything in business

Admittedly my database knowledge is pretty entry-level so a lot of this information was over my head. It’s pretty vital information though if you’re working with huge clients. Scalability is a word that will never go away and applies to absolutely everything in business.

You can view Alistair’s slides below:

I had already seen Tom Robertshaw’s presentation at Magento Live earlier in the year, though there were a few new bits in this one. 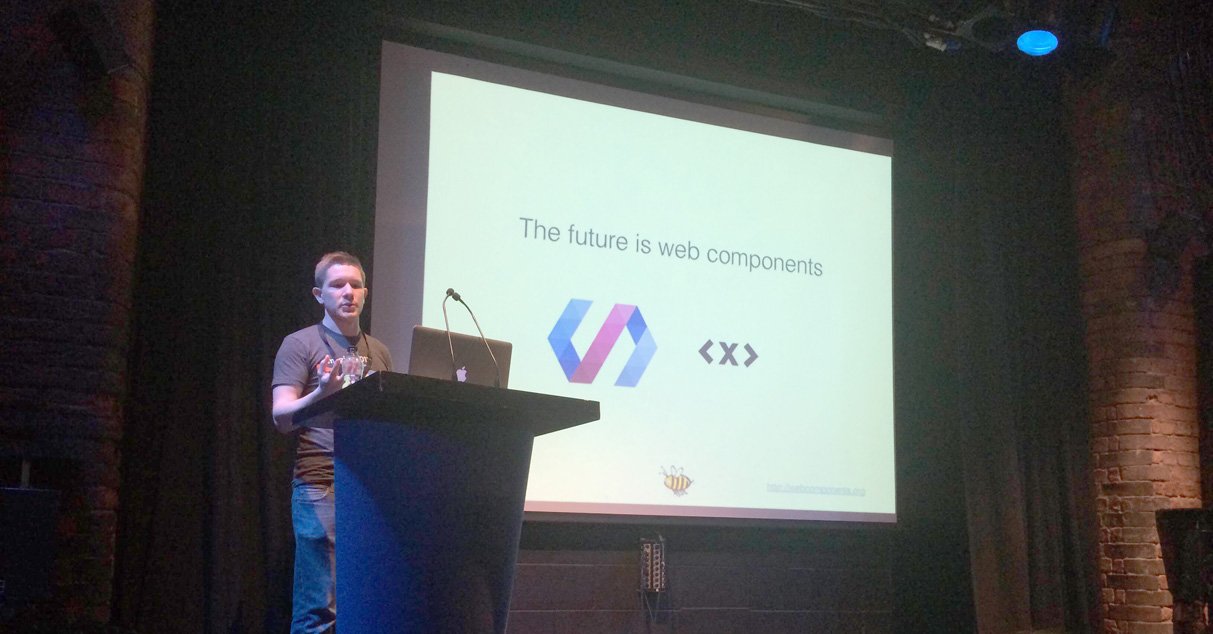 My favourite takeaways from Tom’s talk this time were the following sites, which are less concerned with responsive principles and are more like tools for best-practice frontend development.

Responsive sites should be well designed for accessibility as much as anything else, and Tom introduced a platform called pa11y, which I’ll be trying for myself in the near future. In a nutshell, pa11y produces detailed and visually superb reports about your site’s accessibility – something that should not be ignored.

Another app that I hadn’t previously heard of was Polymer, a resource that allows you to store web components and import them in your site. This is definitely going to become big in the future of frontend development so download it as soon as you can.

As usual, another great talk by Tom who always does a great job of explaining his slides in a lot of detail. I’ve always got time for the ‘shooting yourself in the foot’ analogy, which always cracks me up. You can view the slides below:

The first was about how to use Magento cache tags by Space48’s Tony Brown. This talk also featured some cool tips on how to debug caching problems in Magento. The biggest takeway was that XDebug is a tool that everyone should be using.

I also enjoyed the talk by Yousef Cisco about extending Magento with backbone.js, however I would have liked to have seen a bit more of a beginner’s guide rather than a showcase. I like using both backbone and Magento, but haven’t attempted to combine them properly yet! 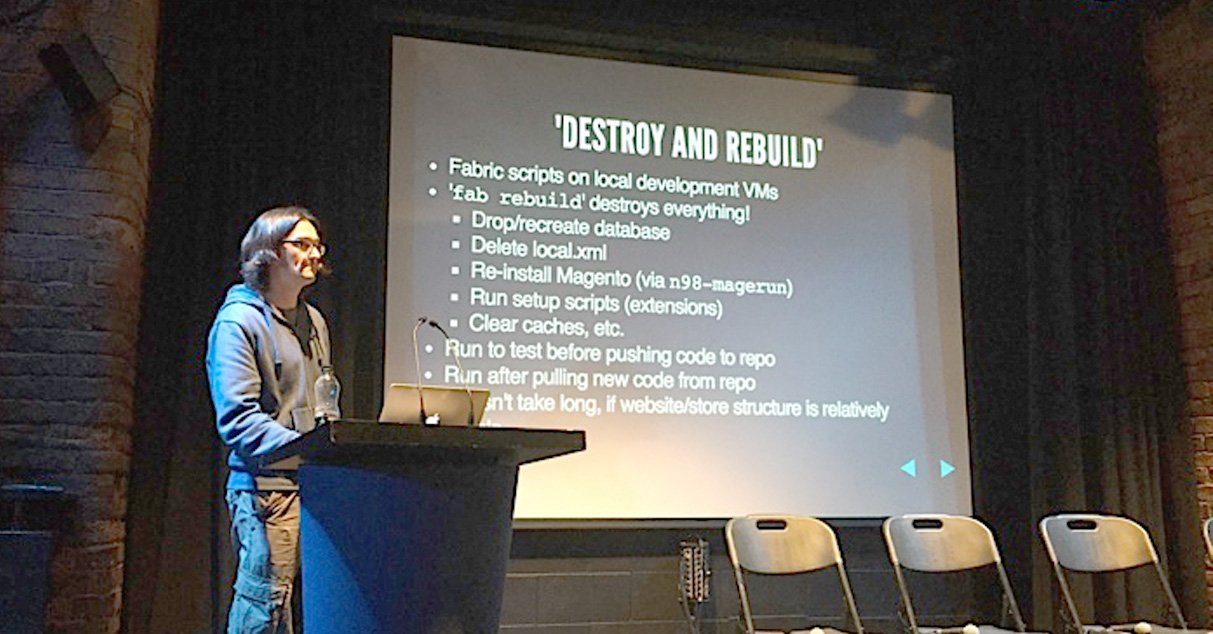 The strangest talk of the day was ‘Why You Should be a Magento Developer’ by Dave Hitchen who basically put himself out there as someone who is just starting out in Magento and needs help. It was actually quite entertaining, even though experienced developers in the crowd probably didn’t get much out of it. To stand there in front of a room of experts and say “I’m a novice” takes some balls, and fair play to him for stepping up at the last minute.

By far the highlight of the day was the panel discussion which saw Ben Marks, Vinai Kopp and Alistair Stead (with Tony Brown asking the questions) take to the stage in a live and unscripted Q&A session. It was both funny and engaging as we saw different takes on the questions thrown at them from the crowd. 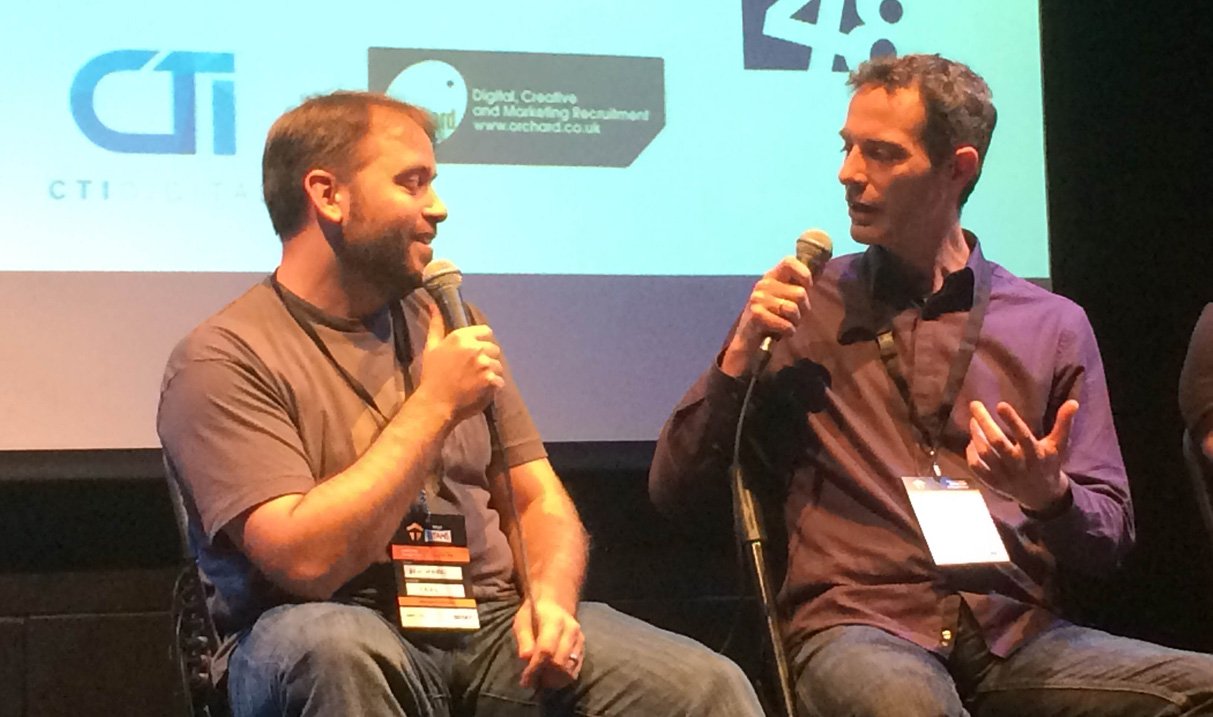 The discussion about caching and optimal server setup seemed to go on forever – it seems to be a debate that will never get put to bed. As someone who mainly works on SME clients, website speed is rarely an issue.

I quite enjoyed the question “what are your killer Magento extensions”, which led me to quickly wonder what do they mean by “killer”? I damn sure know a few extensions that have killed some of my sites in the past! I was secretly hoping CreareSEO would get a mention, but the guys all agreed Aoe Scheduler was one of the best, which is available in the Firegento module repository for you to install with Composer.

My own question got read out, which asked about the issues faced by developers and clients due to Magento’s super attribute pricing on configurable products. In an ideal world the answer would have been “Magento’s ditching it in the next minor release”, but unfortunately the question was met with confusion about the functionality similar to my own.

The two extensions I had used before were Better Configurable Products and Simple Configurable Products, both of which were suggested as possible solutions, but nothing official seems to be in the pipeline. The latter of which hasn’t been updated for 2 years (at the time of writing), so I’m feeling increasingly less confident with it.

This was another presentation that I had already seen previously two years ago at Magento Live. After that presentation I said that I was unconvinced that I would see Magento running on HHVM anytime soon. Hearing Ben Marks endorse HHVM earlier I’m now interested to see whether Magento does anything with it.

HHVM is undoubtedly quicker than PHP as we saw in Daniels slides (which are not online at the time of writing). Perhaps if the same effort went into making PHP’s performance better then we wouldn’t need HHVM?

The last speaker of the day was Magento’s own Ben Marks who gave the crowd an update on what’s happening at Magento from a community perspective, and what improvements are being made behind the scenes. Ben really is a great speaker and was totally at home being on the stage of a comedy club, although a few knock-knock jokes wouldn’t have gone amiss.

It was nice to have an explanation for the sudden removal of the translations page on magento.com (something that I also discussed with him later). Basically, the translations were of such a poor quality that they required instant removal – a new and better solution is currently being worked on by the Magento team.

It’s also good to know there’s lots of stuff being worked on, though Ben acknowledged that there’s not much to show for it yet. Magento Connect is being overhauled (finally) and loads of official developer resources are going to be available on magento.com

Ben finished by thanking the community for all their support over the years. There’s no doubt that Magento would not be the force it is today without the momentum given to it by its dedicated community. It’s true, every day I read my Twitter timeline which is full of tweets by Magento guys (and gals) that I follow, and the sheer amount of different and exciting things being worked on by the Magento community is something to behold. A lot of the time we’re not doing it for money and Magento themselves may not even be aware of it. We’re doing it for the passion and enjoyment we get out of giving something back to the community.

I’m not a man who skips dinner very often, but the afterparty that followed the event was so good that my evening nutrition was subsidised by a ground floor vending machine at the Premier Inn. The afterparty was a blast and as always it was awesome to hang out with the Magento community. Notable mentions go to @bennoislost, @Jon_Woodall, @front_end_code, @despot, @jcowie, @benmarks, @VinaiKopp, (some other guy called Jon) and many others who made excellent use of the free bar and beyond.

To wrap up, the event was a huge success. Great talks, awesome venue and plenty to take away. Bring on MageTitans 2015!